Rounding Up Used Cooking Oils for a Greener Future of Biodiesel 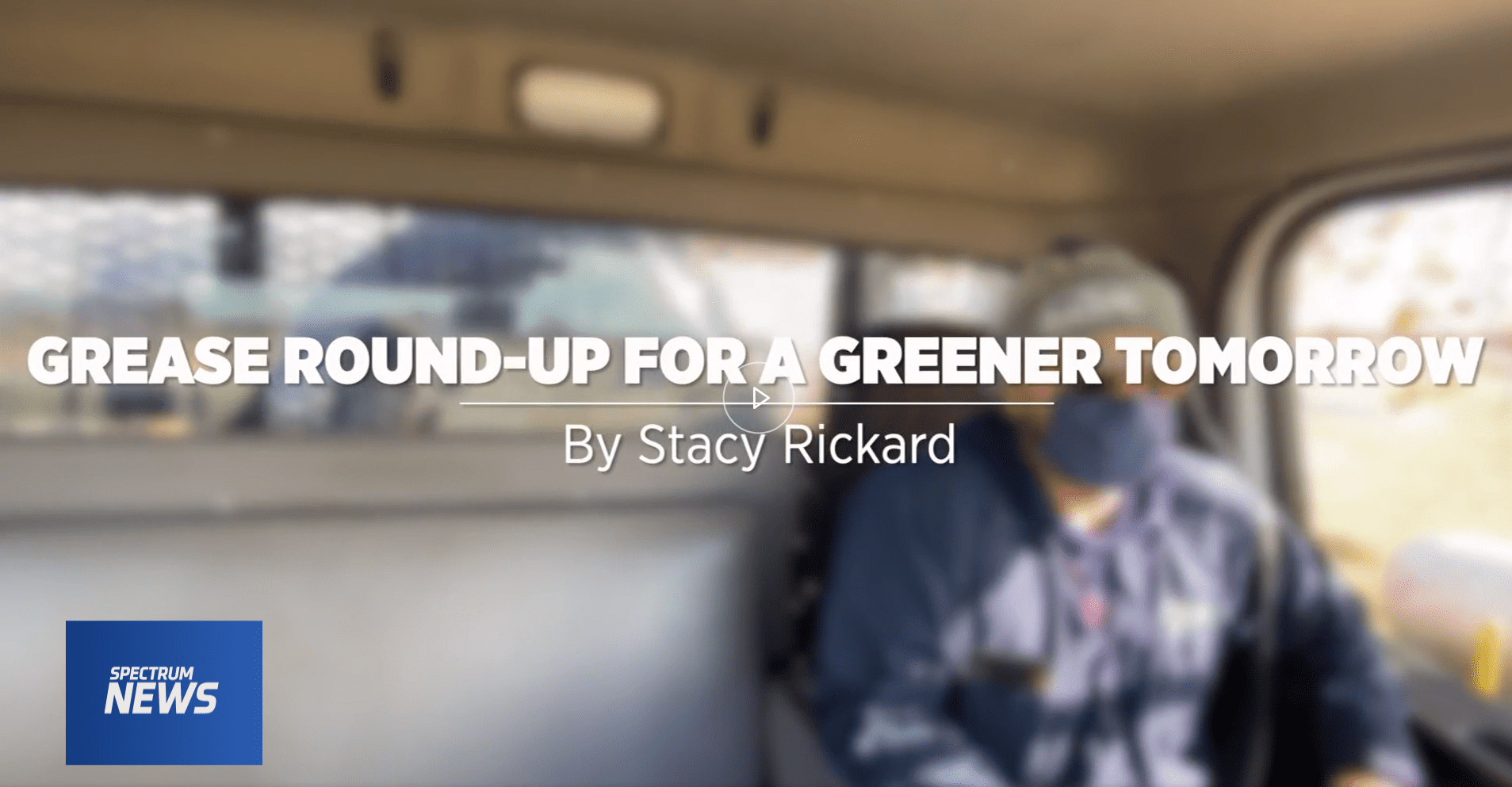 Thank you Stacy Rickard for taking time to share our mission with your community. Click on the image above to see the full story.

DALLAS — Did you know you’re not supposed to put your used cooking oils down the drain? Doing so can lead to a grease blockage in your pipes that no amount of hot water can unclog.

The Defend Your Drains North Texas campaign aims to educate residents of the harmful effects of putting several products down the drain that don’t belong. During the pandemic, there’s been an uptick in non-flushable wipes getting flushed down the toilet. Well now, during the holiday season, more cooking equals more fats, oils and grease produced in the kitchen.

Now until January 4, the “Holiday Grease Roundup,” is available to residents in more than 30 municipalities of North Texas. They can drop off used oils that will then be recycled into a valuable resource, biodiesel, which helps to reduce landfill waste.

The right people for the job!

Our professional trained staff work with your business to get the job done right and timely. We work with businesses of all sizes from mom and pop food trucks to global food processing factories and chain restaurants. You can count on our team to get it done for you right.

Scott is our featured team member, who leads the way installing new equipment such as our indoor systems and maintains the inventory of containers at all of our service locations. ..

When he isn’t at one of your sites, he might even be under one of our trucks performing important preventative maintenance or fabricating new equipment for the biodiesel plant.

With our solutions, you can mix and match our hardware to build a solution that meets your specific needs. Using a single storage tank, you can connect any combination of our solutions into a single trunk line bringing all the oil back to the storage tank.

Optional multi-tenant controllers can be put in place that will track the oil usage for each entity individually. This enables each tenant to have their own portal and reporting on usage. While at the same time all the oil is stored in a single tank further reducing the real-estate required to store the oil.

Intelligent storage solutions for every kitchen!

With our smart indoor grease disposal solutions your kitchen will be outfitted with the most efficient equipment available to keep your operation moving.

END_OF_DOCUMENT_TOKEN_TO_BE_REPLACED The directly connected system is the simplest and easiest to setup and use. Most modern fryers have a filter system and a disposal port, either built in or as an add-on kit. Our system can interface directly with these systems and the controller software of most of the major brands of fryers to provide a full integrated seamless experience for the staff. Simply push the fryers disposal button, option or knob and the oil is moving to the storage tank without the having to lift a thing.

Our tank can be installed just about any place and line run to the fryer. The entire setup is very discrete this way.

For fryers without the option to add a bulk disposal or filter system we have the remote wand system that works like a vacuum and is compatible with any fryer.

Key features that makes this the best solution for any kitchen Push button operation equals safety first: With a simple push of a button, you can be moving used oil from the fryer into the storage tank. Easy to operate and safer than moving oil by hand. Burns and back injuries are common around fryers. Eliminate the need to lift heavy and hot used fryer oil drastically reduces the chance of injury.

Real-estate is expensive, our system has a small footprint: Our system is relatively small compared to other storage tanks. With an average radius of only 28 inches, we can fit in just about any corner of the kitchen or storage closet.

Stainless steel outer layer: The outer body of our steel tank is wrapped in heavy stainless steel to allow for easy cleaning and adds an extra layer of protection for the inner tank. It also serves as a insulative barrier to prevent possible burns if staff touch the tank when hot oil is inside. Safety is the key to our design.

Food grade hoses and fittings where needed: Whenever our product touches your oil while in the fryer, we use food grade parts that meet all standards.

Reliable proven solution: Our solution has been in service since 2011 and never have we had to replace a failed unit. Our hardware and software are designed for reliable, continuous use in the harsh environment of a kitchen.

Realtime accurate measurement of oil level: Our tanks measure the oil level every second 24/7/365 with an industrial ultrasonic level sensor. Management can closely monitor oil usage and track trends. You can extrapolate your oil absorption rate, disposal and estimate your future needs with precision. Plus, your tank will never be full because we both will know exactly how much oil is in your tank.

Computer controlled and monitored with over fill prevention system: Using the level data and tank temp the system will notify you and us of the tank level. If the tank gets too full, it will lock down the tank to prevent over filling and spills. Every few minutes the tank will update the portal with information so you can check in on your locations from anyplace in the world.

Helping the environment: When you use our service, you’re helping the environment by displacing fossil fuels with renewable green biodiesel. We can enable a report for you that will show how many tons of carbon and other emissions you have helped reduce in your community.

Lifetime warranty with service agreement: Never worry about this hardware again. So long as your location has a service agreement with us or one of our service providers your equipment is warrantied for life. If anything breaks, we will send a technician to fix it.

This year could be a “go” for an old biodiesel manufacturing plant at the Denton landfill.

American Bio Source got the keys to the plant in 2014, after another company went out of business at the site in 2008.

American Bio Source has been recycling restaurant oil and grease in the region since 2010 and relocated its recycling business to Denton. But it hasn’t been producing the fuel itself.

“The design requirements changed,” Dobson said. “It could never produce biodiesel in its previous configuration.”

The last biodiesel manufacturer in the Dallas-Fort Worth region recently closed, although there are other manufacturers located around the state, Dobson said.

He watches the rest of the industry and tries to learn from their mistakes.

The previous plant owner had an agreement to sell the Denton city government at least 300,000 gallons of biodiesel each year at a set price.

American Bio Source sends out trucks to pick up grease from hundreds of area restaurants.

In addition, many other producers are dependent on federal tax credits to stay profitable, he said.

The company leases the plant and the property from the city. The city’s solid waste director, Ethan Cox, said the lease contract does have terms if the company starts making the fuel again.

Specifically, the contract provides the city a per-gallon royalty for any biodiesel manufactured in Denton and sold.

“But it doesn’t require them to manufacture biodiesel,” Cox said.

Dobson said the lease expires at the end of this year and talks have begun for its renewal.

We have traditional grease recycling bins to meet  every operation!

From our standard bins that we have made right here in Texas to plastic bins and secured barrels. We have dozens of configurations starting at 45 gallons barrels and bins as small as 90 gallons, 140 gallons, 200 gallons, 300 gallons, all the way up to industrial bulk tanks storing thousands of gallons. Our bins are strong and secured to help reduce theft of the waste oil. Easy to use with lids that keep the rain out to stop over-flowing and easy pour input area compatible with grease caddies. We understand that standard anything doesn’t always work for your business. That’s why we have the ability to customizable our containers if needed to just about any shape or size to fit the available space as needed. Plastic bins and caddy’s are an option

For some installations plastic bins make more sense than metal or secure containers. While much less secure and vulnerable to theft and damage, they make up for it in easy of cleaning and lightweight. Some of our plastic containers are designed to be stored directly under your standard commercial kitchen sink. By far the most versatile storage solution available is still good old fashioned barrels. With the ability to securely close the lid that prevents the chance of spills from tipping and the option of a secure inserts to ditter theft. WIth the addition of an optional containment area pallet or pad you can meet the toughest of regulatory requirements for storage. Whatever your need, we are dedicated to work with you to come up with the most functional solution possible. Our staff have seen almost every possible scenario and have the skills you need to develop a custom solution to those difficult situations.

Intelligent storage solutions for every kitchen!

We have developed a highly versatile waste grease storage solution that can be configured to meet the needs of any kitchen or multiple kitchens or facilities simultaneously.

END_OF_DOCUMENT_TOKEN_TO_BE_REPLACED

The City of Denton has awarded us a long term lease of their closed biodiesel plant. Let the reconstruction begin. After several years of discussion and negotiations with the City of Denton Solid Waste Department “Eco-Works”, the City of Denton City Council approved a measure awarding their long time closed down biodiesel plant to American Bio Source to rebuild and put back into service. We are excited to be part of the future of our great City! We have a mountain of work before us and hope to have the plant in full production in roughly 3.5 years after all the regulatory paperwork is filed and the upgrades and repairs are finished. To start with, we will setup a used fryer oil processing center. Being a used fryer oil and grease recycler already with experience producing biodiesel give us a huge advantage over others who have tried and failed to make biodiesel. We control our “feedstock” our crude basically for making the biodiesel from hundreds of local restaurants we serve. Together with our loyal restaurant supports we will reduce green house gases and help to improve our local air quality! We hope to make this plant into a point of pride for the City and a standard for other Cities to aspire too.